running 8 cups of fresh picked, frozen, then thawed strawberries thru my Norpro strainer. look at all that yummy juice!

I discovered a container of chickpea flour and one of soy flour at the very back of my pantry where they were out of sight, out of mind until I did some spring-cleaning today. :\ I don't know how long they were there - I have to assume the flour is between one and two years old.

Both containers are air tight and the flours look and smell fine, but... I'm just not sure if they're still okay to use. Does anyone know the lifespan of chickpea and soy flour? Do they go rancid, or otherwise bad? Googling has given me conflicting results. Thanks in advance!

If it matters, I only use these two kinds of flour for breadmaking.

I canned some cyan peppers two years ago.
They look brown and king of yucky.
They smell fine but I am unsure if they are OK to eat or not.
Is this pretty normal for peppers?
Normally I eat most everything I can the next year so I do not have much if any experience with stuff two years old.
Thanks for the help!

I have an overabundance of green tomatoes that need to be used.  Does anyone have a recipe for green tomato salsa that they would recommend?  I want to can some for later use.  THANKS!

a few weeks ago my mom and i made strawberry jam. i finally got around to posting the pictures.

last weekend my mom and i made triple berry jam. 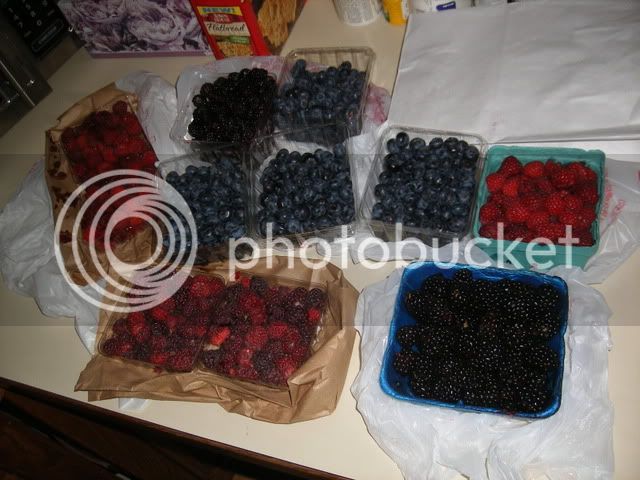 Harvested sweet potatoes today.
Was not prepared for what I got.
What is your favorite way to store sweet potatoes?
I have a wheel barrow full...

Facebook will not hotlink to am image (or I do not know how to) but you can click on the link and look at the picture.

Hello!  I am new to the community and new to canning.  I bought a water canner, but I haven't used it yet! I am getting married next August and I would like to make some jams/jellies/preserves (difference??) for wedding favors.  I think if I start now, I can have enough trial and error time to get it right by the wedding.  My FH is from El Salvador so I would like to make some mango jam for his family.  Maybe strawberry for my all american family.  Or maybe a mix, like a mango-strawberry for everyone?

What do you think?  Has anyone gave jams as favors? I am looking for easy mango jam recipes (I live in MI, but I can buy frozen mangos at Trader Joes)

Any suggestions are greatly appreciated.

I remember seeing in the Food Inc documentary about how major brand chicken farmers were essentially told what to do and how to do it since the food company owned the chickens and could renew their contracts or not based on how the farmers followed the company's directions. I think that's a horrible way to live and begrudge the big chicken companies for it.

Now it seems those bullying tactics have flowed to the organic side of things. Organic Valley, a "coop" of dairy farmers, has suddenly put pressure on it's member farmers telling them that if they have a herd share (a way for consumers to get raw milk) they are in jeopardy of losing their OV contracts. By and large, those farmers who participate in Grade A milk supplies along with herd shares certainly aren't getting rich on the herd shares. One farmer said 95% of his milk production goes to pasteurization supplies while the 5% goes towards herd shares. So if that's mostly the case, why then is it necessary for Organic Valley to bully and essentially blackmail the farmers to give up the herd shares? the ODA tried this a few years ago with a fairly large dairy farm north of here. I don't know the ins and outs of how it was settled but they're still doing herdshare. The kids' mom talked to some of her fellow homeschool group moms yesterday that ARE being affected by the Organic Valley bullying... they're losing their herdshare because the farmer can't afford NOT to have that supply line.

I think it's ridiculous! Makes me wonder what they're so worried about and why they feel it necessary to step into thug territory by threatening farmers. If their products are so great, then what's the problem? And their products are good -- we've been purchasing Organic Valley butter for years. But not any more!! Organic Valley's practices of bullying and blackmailing their coop farmers with loss of contract if they continue a herd share operation, no matter the size, is reprehensible and certainly not a business practice I would have expected from a company like Organic Valley. And as long as they continue to dictate to whom farmers can sell legally sell their products, they will not get a dime of my money.

Originally published at Notes from the bunker.... You can comment here or there.

The missus reported that someone at her place of work wound up having to clean out her deceased mothers house in preparation for a remodel. As they are cleaning out the accumulated detritus they come across canning stuff. Would I be interested? Sure. I can always use more jars. Well, in addition to empty jars (carefully inspected for nicks, chips and other damage) there were some full ones. Pears and peaches mostly. How old? Well, lets let the EOS 7D do the talking:

The box is from a Montana brewery that ceased operations in ‘48. It probably has some collector value to it…especially if it still had beer in it. But, alas, no 60-year-old beer.The contents? Well, theyre a bit newer but not by much.

Wonder how old those jars are? Fortunately, someone labelled them:

Yup, those jars are from 1963. Kennedy was President (well, for most of that year anyway) and coins were still made of silver. Ah the ’60s. It looks like things held up remarkably well for sitting on a basement shelf for almost five decades. Wait….or did they?????

Notice that the two rightmost jars appear to have sludge in them. Not surprising since the seals on those two jars have lost their integrity. The lid does not have that familiar concave depression that comes from a well sealed jar. As a result, the contents of the jars have turned into something that I would imagine is incredibly foul, putrid and toxic. (In fact, the canning books urge you not to just pour this stuff into a hole in the ground because of water contamination and botulism concerns).

The jars on either side of those two, however, have lids that remained intact and the contents appear to be just fine. I say “appear to be” because while I might open one up and see how it smells it is highly unlikely I will attempt to ingest 47 year old home-canned peaches. Although, I must admit, I am tempted to do so….just a little tiny nibble to taste.

The interesting thing about all this is that, theoretically, properly canned food will last a lifetime. I’ve no doubt the nutritional value of the peaches and pears is virtually nil but its still calories to the hungry. While I have some serious(!) reservations about consuming the 47 year old produce, I wouldnt have any concerns if it were, say, five yeras old or so. Still, good to know that stuff can be preserved for that long a period of time.

Here is a slideshow of our reorganized kitchen pantry, our reorganized medium term food storage in the garage, and then the root/wine cellar/long term storage (this includes photos of the root cellar in progress and then after being built).